If you know me even remotely at all, you know one thing: I am obsessed with Chipotle and Pop Culture. In fact, oftentimes I can be found discussing celebrity fandom over a burrito bowl. Thus, I figured it was due time for me to discuss my reasoning for being head-over-heels with the celebrities that I often obsess about, retweet, and just generally wish I could kick back a few cold ones with. So without further ado, here is my list of the top 5 celebrities who I wish were my best friends. 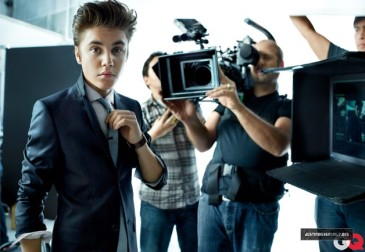 Before you stop reading, hear me out. Homeboy’s got a lot going for him. A hot as hell girlfriend (you know it’s true), an insanely good sophomore album (if you don’t believe me, listen to this), and yacht-fulls of cash. How could he not be a good friend to have? The best way for me to describe the young Biebs is just a little nugget of #swag. On top of all of that, homeboy [this is my new BFF name for Justin, if you couldn’t tell] was recently golfing at a country club when, upon spotting paparazzi up ahead of him on the green, aimed his next shot right for their heads. His words to the club employee upon leaving: “we’ll probably never play here again.” OH- and he’s one of the few celebrities who actually has the balls to be frank with his fans. Case and point: when he was waiting for his girlfriend, Ms. Gomez, at the airport, he straight-up told his swarm of fans that they were completely disrespecting his privacy and weren’t true fans. Homeboy’s got some serious nugget #swag.

If you’ve never seen ‘New Girl,’ please go reevaluate your life. While I have been obsessed with Zooey since her ‘Elf‘ days, ‘New Girl’ sent her soaring to my BFF list almost immediately. Yes, I love her for her famously “adorkable” personality, but I just feel like there is so much more to her. And, well, I’m correct. She co-founded Hello Giggles, the “ultimate entertainment destination for smart, independent and creative females” with two of her friends (one of which I am also incredibly obsessed with- if you don’t follow Sophia Rossi on twitter now, please act accordingly). If you still aren’t just as convinced as I am that Zooey would be a fantastic BFF, I highly suggest listening to her out-of-this-world voice, via her musical duo “She & Him.” And last, but most certainly not least, would be Zooey’s iPhone commercial promoting Siri. From the perspective of someone obsessed with advertising, it is perfect. From the perspective of any human being ever, it is perfect. Rock on, Zooey. Rock on.

If you’ve never met me before, I guess you’re about to find out a little about my political/personal views. I love gay people. And I love people who love gay people. Chris Colfer, my friends, is a flaming homosexual. And I love it. Similar to #4, if you have never seen ‘GLEE,’ please go reevaluate your life immediately. Mr. Colfer plays Kurt Hummel, a gay student at McKinley High School who had some trouble fitting in at first, but is now absolutely fabulous and is 1/2 of the best gay couple since Neil Patrick Harris and David Burtka. Chris Colfer is not only the best part of GLEE, but he won a Golden Globe for his exceptional role on the show (it was king of a big moment).-the very role that didn’t even exist before Chris auditioned. Yes, he was that phenomenal that the creators of the show just had to add a new character. Talk about an influential person. Chris, be my BFF if not only for the sake of us drinking martinis together at a bar and being fabulous.

My love and obsession for the creature that is Ke$ha is no secret. In fact, I’m actually quite public about my love affair with the hot mess of a rockstar. Not only was I Ke$ha for Halloween two years ago, but I have one of her quotes on a canvas in my room at school:

“Society has taught us to suppress certain things, but if I want to do something, I let the animal inside take over, no matter how uninhibited or irreverent it is. Who cares? Crazy people are what keep life interesting”

So, some people may think that she is just a drunk mess who doesn’t give a f*ck about anything? Well, that’s because she is. She literally doesn’t care about anything. And that is precisely why I love her so. Someone who doesn’t care whatsoever about what people think of them- now that would be a great BFF. Plus, she knows how to party. That never hurts.

Last, but most certainly not least, I think Matthew Gray Gubler would make the best friend ever. The weirdest, no doubt, but also the best. For those of you unfamiliar with this name, the Goobs (similar nickname to the Biebs) plays Dr. Spencer Reid on ‘Criminal Minds,’ one of the best shows created on the planet. While Reid is undoubtedly the best character on the show–he’s a certified genius–MGG is the best character in life. His website provides quite the insight into his fantastic and perplexing mind. Seriously, click the link, it is disturbing and perfect at the same time. He also models (OBVIOUSLY) for Aldo and is perfect. Seriously, I think I could just sit and watch him breathe and it would be entertaining. Disclaimer: I swear I’m not psychotic. He is awkward and incredible, adorable and frightening, and PERFECT AND PERFECT. MGG- please contact me so we can run off into the sunset together and never return.

Oh, and just to get everyone else obsessed with him, here’s his description of his perfect woman:

“Must love decorating for holidays, mischief, kissing in cars, and wind chimes. No specific height, weight, hair color, or political affiliation required, but would prefer a warm spirited, non-racist. Cynics, critics, pessimists, and ‘stick in the muds’ need not apply. Voluptuous figures a plus. Any similarity in look, mind set, or fashion sense to Mary Poppins, Claire Huxtable, Snow White, or Elvira wholeheartedly welcomed. I am dubious of actresses, felons, and lesbians, but don’t want to rule them out entirely. Must be tolerant of whistling, tickle torture, James Taylor, and sleeping late. I have a slight limp, eerily soft hands, and a preternatural love of Autumn. I once misinterpreted being called a ‘coal-eyed dandy’ as a compliment when it was intended as an insult. I wiggle my feet in my sleep, am scared of the dark, and think the Muppets Christmas Carol is one of the greatest films of all time. All I want is butterfly kisses in the morning, peanut butter sandwiches shaped like a heart, and to make you smile until it hurts.”

You’re welcome, world. I hope you have now grown to love my celebrity BFFs just as creepily as I do.

As a bonus for making it through that entire post, and an homage to the Jonas’ who I unfortunately but truthfully did not include in this post, please enjoy my favorite picture of any celebrity ever:

2 thoughts on “Top 5 Celebrities I Wish Were My BFFs”

Reply to my ramblings! Cancel reply