Let’s start this off on an honest note: I debated for a pretty long time about whether or not I would write a synopsis of 2013/welcome to 2014 post. In terms of articles and things people talk about, it’s pretty high on the popularity list, hence I didn’t want to just be another post among the Facebook statuses, tweets, and other buzz you saw in the final days of December. In my defense, I’ve also had quite a bit happening in the last couple of weeks: going home for Christmas, best friends visiting the Windy City for almost a week before New Year’s Eve, winning the Orange Bowl, turning 23, and surviving the deathly Polar Vortex cold, also known as #ChiBeria (this last one is still up for debate). Now that the chaos has died down a little bit, here I am, nestled in my apartment in Old Town Chicago, watching the snow fall (once again) outside my window, and a Daisy Cutter in a coozie next to me. 2014, you look pretty dashing so far- besides the potential frostbite.

I find myself very fortunate to be the same age for practically an entire calendar year (does this make me weird?), so 2013 and 22 go synonymously for me. That being said, 22 brought a lot of ups and downs. There were the obvious big life events that happened: graduated college, moved to Chicago, got a job. But to me, what’s more important than the big moments is the details put in to them. And it’s the details that I want to remember about 2013, not the big events.

My final semester of my Senior year at Clemson was probably one of the hardest for me (yep, even harder than Freshman year) because, to me, it meant that change was coming. I have never, ever, been good with change. The idea of change- I am absolutely infatuated with it. But actually putting my feet on the ground and going through the motions is just something that is really hard on my soul, no matter how much I crave it and no matter how good it is for my well-being. However, even though it was a hard one, that final semester Senior year was probably my favorite one, filled with incredible memories with amazing people.

It is this fear of change that kept me at Clemson for a month after graduating. No plans, zero to little money- just me watching all of my friends pack up their things and move onto the next chapter in their lives. Don’t get me wrong- that was a pretty good month. There was a lot of sleeping in ’til who knows when, sitting at the pool for who knows how long, and taking ridiculous road trips to who knows where with my fellow vagabond Melissa, who stuck around for that month in Finley with me, thank goodness. But at the same time, it was extremely terrifying. This time, I knew that change was imminent: it needed to happen. 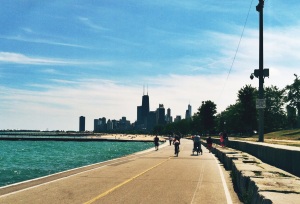 Flash-forward two months and I am driving 13 hours to Chicago in a rental sedan packed with everything I could manage to fit. Did I have a plan? Nope. Was I terrified beyond all belief? You betcha. But it was the most excited I had ever been for anything in my entire life. I couldn’t count on two hands how many people told me I was crazy for doing what I did, but it is probably the proudest I have ever been of myself. This was something I did not need to do; I could have easily lived at home, saved some money, been comfortable in a city I already knew, and been completely fine. But, hey, where’s the fun in that?

This is nothing against those who did something along those lines; to be quite honest, I commend you. However, for me, if I had done that I just know that I would not have been happy or fully satisfied. But you go, glen coco.

It hasn’t been a walk in the park; I will be the first one to admit that. There have been a lot of rough days where I have wanted to give up and take the first flight home. I even reserved floor space at one of my friend’s apartments in DC in the event that that might happen. But I will say one thing- having the extreme fortune to live with one of my most cherished friends in this city that we both used to call home when we were younger has made this process so much better than it could have been. I’ll say it once, and I’ll say it again- the life that Laura and I lead would make an extraordinary reality show.

So, again, here I am on January 9th, freshly 23 years old, fully employed, and feeling like a true Chicago-an, meaning I am freezing to death walking to work every morning in -11 degree weather. In all seriousness, I’ve come pretty damn far from the girl who stayed in Clemson because she was too terrified of what would happen next, and it’s hard to believe it’s only been 7 months since then.

2014, I’m pretty jazzed to see what you have in store for me. I learned quite a bit more about myself than I thought I would last year, so, swing away- I’m sure I can handle it.

PS- I’ve included my Spotify playlist that was never very far from me during June-December of 2013. There’s a lot of John Mayer on it, sue me.