Before I get into this relevant and most necessary post, I would like to start off by welcoming both my fellow Comm. Studies major Emily Tumlin and my fabulous roommate Lauren Reddeck to the wonderful world of Wordpress! I am so glad to have convinced you both to join in on the fun.

Now on to the good stuff.

Y’ALL. As someone so passionate about writing, marketing, and social media, I feel the need to shed light on something that has been driving me up the wall. I have been absolutely dumbfounded and, to put it more eloquently, perturbed, at some of the not only public but promoted material being pushed out by brands on various social media outlets. For the most part, companies and brands are pretty good about making sure that their content is error-free. It has to be, right? I mean, this is how brands are connecting with their customers. Their social media handles are a direct extension and representation of the company. This stuff is kind of important. And I understand that mistakes happen, but come on. It is not that difficult to proofread something before publishing it directly to the newsfeeds of thousands of customers/potential customers.

The following are four examples that I have found solely through my own personal presence on social media. I did not go searching for these mistakes, I simply came across them on my various feeds. And they are not even the biggest or most obvious mistakes, but nonetheless, they exist. Also, I am 100% aware of the fact that I sound like the world’s ultimate social media nerd. I am okay with that.

This first gem was posted on the ABC Family hit television show Pretty Little Liars‘ Facebook page, and it is probably the least harmful of the four examples. Let me just also say that 9,924,729 people are Facebook fans of PLL. Yes, this post was sent out to almost 10 million people. I will give them some credit, however. They’re using bit.ly, which, for those of you that don’t know, is a URL shortening and bookmarking service that tracks data from whoever clicks on the URL. And if you check out their Facebook page, they actually have a really strong and successful social media plan.Their interaction level with their fans is off the charts, and is evidenced by their close to 10 million fans. But let’s be serious; if one more person would have looked at this post, this tiny little error could have been prevented. I’m not letting you off the hook that easy. -A

Taking it up a notch on the stupidity scale of mistakes is this specific action via twitter by Samsung Mobile US. A little background on Samsung’s presence on twitter: they have 4,313,729 followers, are verified, and have over 24,000 tweets, which is evidence of the fact that not only do they use twitter to promote their brand, but to create conversations by responding to their followers. But this….this tweet is just unacceptable. First of all, from a marketing perspective, it’s really never a good idea to actually ask users to ‘RT’ or ‘like’ something. If your content is actually good, people should do that stuff anyway. Second of all, it’s not just one letter that is off. Whoever wrote this used an entirely incorrect word (even if it is only two letters long). And third of all, and most importantly, SAMSUNG PAID TO PROMOTE THIS. Seriously? Samsung spent actual real dollars to have this tweet come up in every twitter users’ timeline. This is what my nightmares are made of. 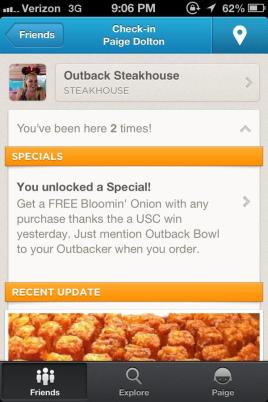 Branching out to a primarily mobile platform for social media mishaps is Outback Steakhouse with this lovely error on their Foursquare page. If you are not familiar with Foursquare, it is a mobile social networking app where users can check into the various places they visit and collect points, leave tips and recommendations, and see what kinds of places their friends are visiting, as well. It’s a pretty handy little app for both chain stores and local businesses because not only can they see who is visiting and what they are saying about their visit, but they can also offer users specials and discounts.

This error particularly got my teeth grinding for a variety of reasons. First of all, as a Clemson fan and student, I am not particularly proud of the fact that I cashed in on South Carolina’s win over Michigan at the Outback Bowl. All I have to say is that no matter the circumstance, if there is a free Bloomin’ Onion involved, you can count me in. However, I was going out on a limb by publicly stating that I was reaping the benefits of a USC win and Outback really let me down. I genuinely do not even know what they were trying to say. “…thanks the a USC win yesterday.” I mean, seriously? If your company is going to take the time to implement a social marketing campaign, you have got to at least make sure that it makes sense. I will admit, though, that  Outback was very quick to respond to me via twitter when I publicly called them out on their mistake. Just tryin’ to help a brotha out.

And last, but most definitely not least, is, in my case, the editing (or lack thereof) mistake that broke the camel’s back. Should we discuss the time that the website for the White House (you know, the home of the President of the United States, the leader of the free world, the ruler of our government and country?) posted this on their live video feed? Should we talk about it? Or should we just try to move on with our lives and pretend that this never happened?  Because at this point, my blood is boiling and I might hurt someone. 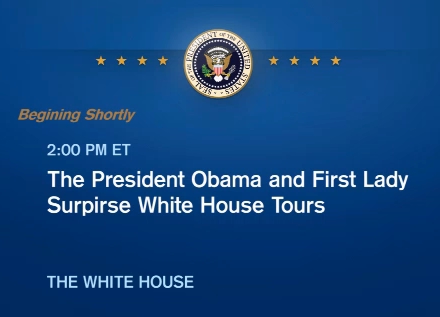 In essence, just get it together people. Think before you post. Especially if you’re a nation-wide restaurant chain, or, you know, the President of the United States. You can do it. I have faith in you.

4 thoughts on “Basic Editing: It’s not that difficult.”

Reply to my ramblings! Cancel reply